In a world first, a commodity trade just took place between China and Singapore entirely via blockchain technology. Blockchain tech was used to facilitate and optimize the processes inherent to the unique transaction.

This is a guest post from Raja waqas Javed.

First Commodity Trade Between China and Singapore on Blockchain

The current trade activity was managed under the supervision of Sinochem Corporation’s subsidiary Sinochem Energy Technology Co. Ltd, which used blockchain for the shipment of gasoline to Singapore. China, having one of the fastest growing economies, is now totally dependent on the import/export of energy to and from various countries. For this reason, the country is exploring all the options for optimization. 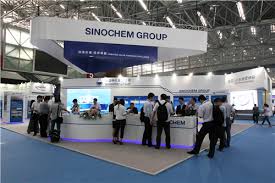 Sinochem Corporation, one China’s four big state-owned Chinese oil companies, conducted this trade from the coastal city of Quanzhou. This was the first time that a trade of this type was solely conducted from beginning to end via blockchain.

Energy trading in the past used to be a long process, and the company means to make the complex procedure an easy one by incorporating blockchain in it. The use of blockchain can reduce the cost of the recording of key documents and digitize them.

It wasn’t the first time that the group Sinochem used the blockchain in its operations — it had used the technology for the crude oil import transaction in December last year. The company had since been trying to implement blockchain throughout the entire process completely, this time for the export too.

The best real-world use cases of this fledgling technology thus far have been seen in the supply chain and logistics industries, while it has successfully been used in the real estate business too.

What’s Next for the Tech

At the beginning of 2018, the U.S. used blockchain technology to carry out an agricultural trade with China. The trade included 5 different parties that were connected through blockchain and carried out to deliver a cargo shipment of soybeans while using the platform called ETC (Easy Trading Connect).

A Chinese retail company JD.com is also willing to incorporate blockchain technology in its system; this would also ensure that the products being sold and delivered by the store meet key quality standards at all times. This would also allow buyers and customers to track their orders.

The blockchain technology that has been used in commodity trading mainly uses smart contracts for the organization of data and self-execution of tasks. This technology gives a long-lasting solution to the financial transactions in the trading of commodities. There comes an ease in many operations when the tasks are managed in self-execution mode through smart contracts. The utility of these applications in logistics and trading are unmatched.

The trade of soft commodities depends on market volatility, which includes the management of supply chain and risk management. Blockchain can make the process of tracking physical orders easy and resolve the issues that come with the records being saved on paper.

The incorporation of a system as robust as blockchain can develop trust between the trading parties and cater the participants with the best options possible. Therefore, the proof of concept that has come in the form of commodity trade between China and Singapore can serve as a testament to what is possible in this brave new world.

Do you think the future of commodity trading will all be via distributed ledger technologies? Sound off in the comments below.

Waqas Javed is a digital marketing strategist and helping companies to maximize online reach with his unparalleled skills. He has a practical experience of more than 5 years. Currently, he is serving at Pacsquare Technologies where he is working on optimization and promoting of the company.

The opinions expressed herein represent the personal views of the guest author. This article is not investment advice.