The Bitcoin Price Continues to Rise, But No One Is Actually Using It

The Bitcoin Price Continues to Rise, But No One Is Actually Using It

At press time, the bitcoin price commands a value above $7000. And now that the SegWit2X fork is out of the picture, we might even see another rally to the $8000 zone.

Also read: Bitcoin Classic Shuts Down, Another Victim of the Scaling War

Many market-watchers project that the bitcoin price will reach $10,000 by end of year. But is this possible? What drives the bitcoin price? Has the use of bitcoin increased significantly enough the past year to justify the bullish price trend?

Bitcoin continues to rise despite all the obstacles it faces. Hard forks, government regulations, and cyber attacks are just some of the main challenges that threaten the digital currency.

However, there is another factor that not many people are talking about which might prove to be quite the deal-breaker for the future of Bitcoin.

And that is the fact that the daily transaction volume for Bitcoin hasn’t increased over the past year, despite the price rising by 900%.

And if you consider the fact that transactions between exchanges are also included in these statistics, there has been no real increase in the usage of Bitcoin over the past year to justify the huge price inflation.

What Is Driving the Bitcoin Price Right Now?

It seems then, that people continue buying bitcoin, and new investors enter the market every day, but they aren’t moving their coins around. Essentially, they don’t care about using bitcoin as a currency. Rather, the traders responsible for this massive rally to $7000 and beyond want to hold the digital currency as an investment, hoping to get rich quick.

With this class of investors leading the bitcoin price, the source of this growth in value — versus transaction volume stagnation — can be broken down into three categories:

Incremental Value — Which is created by speculative news events. This is due to the incapability for finding a fair value for Bitcoin to converge to by most of the market participants.

FOMO Investing (Fear Of Missing Out) — People don’t want to miss out on the excessive gains and profits that Bitcoin is dispensing, so they buy in and hold on. That drives the price even higher, bringing on another wave of FOMO investors. It’s seemingly a never-ending cycle.

Increased Market Share for “Store of Value,” — To the speculative investor, it doesn’t matter whether Bitcoin is a currency, commodity, or business. It has so far proved to be a decent store for value with excellent returns. Therefore, regardless of its theoretical use-cases, speculators buy bitcoin and do nothing with them, simply waiting for the value to increase.

Those three things all contribute to the growth in bitcoin price, but none of them translate into a significant increase in transaction volume. Meanwhile, the number of people that actually use bitcoin as a currency has remained constant over the last year.

Is Bitcoin Better as a Store of Value?

In a recent interview with MarketWatch, serial entrepreneur Mark Cuban emphasized that bitcoin is a robust and efficient store of value.

He stated that he personally considers bitcoin as a collectible like expensive art, because there is only a finite number of bitcoins that could ever exist.

Cuban’s opinion corresponds with the trend of people buying bitcoin and not moving it. On another note, it also suggests that Bitcoin is stealing a part of gold’s market share as a store of value. Given that gold is a $7 trillion market, Bitcoin at 120$ billion is still quite minuscule compared to the size it could potentially reach.

Regardless of how and why Bitcoin is growing, the fact that transaction volume remains constant should concern the community and investors. When people talk about Bitcoin, they often bring up how it can replace governments, take over banks, and bring about a decentralized revolution of the economy. However, all of those things require a substantial increase in transaction volume and adoption in order to become a reality.

So, if you really want Bitcoin to take over the world, you better get to work on increasing its daily use as a currency.

Do you agree with this theory? Share your thoughts in the comments section. 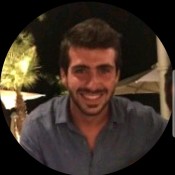 Contributor to bitsonline.com based in Cyprus.
BSc Software Engineer, MSc IT w/ Business
Cryptocurrency enthusiast & Blockchain believer.
-The Revolution will not be Centralized-
Follow me on Twitter @skout_0