Ethereum’s march toward Proof of Stake (PoS) continues, as researcher Karl Floersch has just released a guide on how to use an alpha Casper FFG testnet through pyethereum. The testnet’s parameters — which are not finalized — currently require 1,500 ETH as a minimum staking amount.

In what many Ethereum users will consider a symbolic cap to a strong year, Floersch released the “Alpha Casper FFG Testnet Instructions” earlier this morning on 2017’s final day. 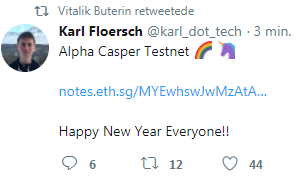 The former model, which Floersch’s freshly released testnet is based off of, will manage Ethereum’s shift from Proof of Work (PoW) to PoS. Likewise, Casper CbC will be used to manage Ethereum’s consensus process after the shift to PoS has been finalized.

When over, this transition will allow Ethereum users to “stake” ether to validate the network, as opposed to the mining that’s currently required through PoW.

For users interested in taking the new FFG testnet for a spin, it’s only available for now through the pyethereum client.

In his guide, Floersch was careful to keep expectations realistic, noting that:

“pyethereum […] has a much lower processing capacity than clients implemented in faster languages; as a result, network parameters will be heavily restricted to ensure network sustainability. Do not expect performance equivalent to test networks operated by more performant clients such as Geth and Parity.”

“First, you will need to have enough testnet ETH to become a validator. You can either mine a lot of blocks, or ask us for ETH (faucet may be available soon).”

Floersch clarified that, at least for now, a minimum of 1,500 ETH will be needed to officially “stake” on the testnet. No word yet on how much ether will eventually be needed to do the same on the mainnet.

On top of technological advancement, things are also looking up for the Ethereum community when it comes to adoption.

Moreover, the Ethereum network also saw its largest daily transaction throughput on December 30th, with an unprecedented 1,136,659 ether transactions being handled by the network.

Bitcoin has proven resilient beyond everyone’s expectations over the past several years, so it’s number one position by market cap seems safe for now.

But — love it or hate it — there’s no question cryptocurrency stalwarts like Ethereum and Ripple are poised to eat into Bitcoin’s market dominance like never before in 2018, regardless of whether either of these projects ends up taking the number one spot.

Where do you stand? When do you think Casper FFG will be fully implemented? One year, two years? Is PoS the path to the future, or is PoW too tried and true?

How Well Does Lightning Network Work? Try a Test Node and See