Putin Tells Russia: We Will Lead, Develop Our Own Blockchain Platforms

In his latest address to the Federal Assembly — analogous to a U.S. President’s State of the Union address — Russian President Vladimir Putin highlighted his country’s growth and plans. The firebrand president notably went all-in on blockchain tech during his speech, saying Russia must take charge and develop its own blockchain platforms.

It is not the first time the Russian President talked about the importance of blockchain technology. Not long ago, he emphasized the possibilities that could come with adopting blockchain solutions, and why Russia should not fall behind other nations in the digital rat race.

Notably, then, Putin’s new comments mark a decisive shift from “could” and “should” to “will.”

While addressing the nation, Putin declared the country must build its own blockchain platforms. He stated:

“We need to build our own digital platforms. It goes without saying that they should be compatible with the global information space. This would pave the way to reorganizing manufacturing processes, financial services, and logistics, including using blockchain technology, which is very important when it comes to financial transactions, property rights, etc. These initiatives have real-world application.”

The same message was broadcast from the Russian President’s official Twitter account, which was livetweeting the speech as it was ongoing.

Russia must develop its own blockchain platforms #Putin #PresidentialAddress

Putin’s sentiments here appear akin to those of Indian Prime Minister Narendra Modi, who recently called on India to quickly adopt disruptive technologies like blockchain and the Internet of Things (IoT).  Recently, Putin also proposed to launch a multinational cryptocurrency that could be espoused by BRICS nations and the Eurasian Economic Union after discussing the idea with Ethereum co-founder Vitalik Buterin.

Russia Angling to Be Blockchain Leader

In his address, Putin envisioned Russia becoming a leader in information and technology space.

“Russia must not just become the world’s key logistics and transport hub, but also, which is very important, a global center for the storage, processing, transfer and reliable protection of large volumes of information, so-called big data,” he said. 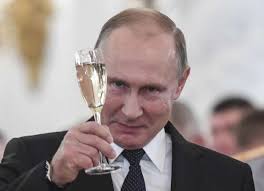 Will Russian take the lead in the blockchain technology revolution? Let us know your views in the comments section.

Slowly, But Surely, The Bitcoin Price Is Heading for Another Rise