What Could Spark Such a Sudden and Drastic Crypto Crash?

It’s been a frightening few days in price action for crypto-enthusiasts. The markets surrounding bitcoin, ether, litecoin and other currencies have seen a crash as massive sell-offs repeatedly pushed cryptocurrencies in general into strongly bearish trends.

Overall, an astonishing $300 billion dollars have left the crypto ecosystem since the year of 2018 began.

As the market proceeds to lick its wounds from the crash, many are feverishly wondering what could cause such a dramatic shift in such a short amount of time.

A common bit of speculation for the ongoing crash is all the looming threats from regulation. Between Malaysia, France, and China’s recent hard stances against bitcoin and “criminal” trading, one can only assume that the crackdown caused many global traders to sell their stashes in a hurry, causing a sudden drop in the global exchange rate.

Another theory? Massive sell-offs occur among crypto-holders every January according to historical charts, and this week the trend appears to be materializing again in this present crash. 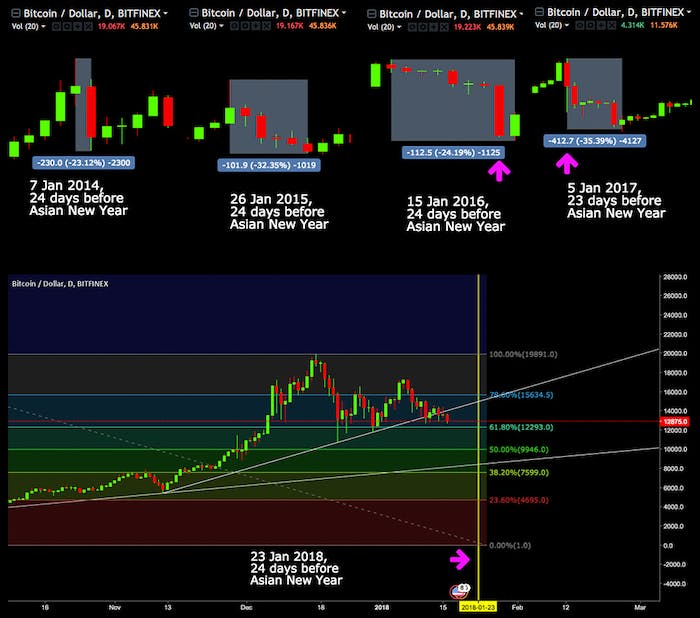 But some sources suggest a more basic and less frightening probability – a correction. No doubt, it’s one of the heaviest corrections we’ve witnessed in a long time, but the market’s alleged fix of itself might be the answer we’re looking for in the current crash.

“Cryptocurrency bloodbath today – this is no longer triggered by South Korea, but rather the exponential surge in the value of cryptocurrencies I and a correction to stabilize the market. I don’t think every price move can be justified.”

A nefarious theory going around now is that the bitcoin price is intentionally being tanked (dragging the rest of the market with it) in order that institutional “shorts” through bitcoin futures can be successful.

January 17th is the closing day of the first futures contracts, and now it seems that the short lengths behind current contracts might hinder explosive growth in the weeks ahead.

The good news is that crypto isn’t dead yet. It’s wounded acutely in this crash, but it’s not a forgone investment by any stretch of the imagination.

In fact, despite digital currency’s recent trip down south, Bitsonline resident technical analyst Ramiro Burgos thinks a bitcoin price of $40,000 is still possible in the long-term.

So, before we start thinking this is the beginning of the end, let’s give the market some time to heal. No battle is won unscathed; one garners a few bruises here and there, but it’s the ending results that makes the fight worthwhile.

Could bitcoin reach $40,000 by the end of the year? Post your comments below.